The other day I got some good news. When my dad got home from work I excitedly told him about some extra scholarship money I’d been awarded because of my academic performance. My 14 year-old brother, who was in the next room playing Battlefront (and evidently eavesdropping) said, “you should get a scholarship for sports.”

I pointed out the teeny flaw in that master plan: “I don’t play sports anymore.”

Look we all know that teenage boys can be more than a bit obtuse, and my little bro is no exception. Currently he is in the sports, fitness and body image obsessed stage. He tells us how he is “teased” by his friends about his muscles being too big; he works out way more than he should, and he flexes A LOT. Another thing he does a lot is make insensitive inquiries such as, “when you gunna start running again?” Or, “Are you ever gonna play basketball again?” And even,” When you gun’ get back in shape?”

I get it. He misses the older sister that he could be proud of. He misses the girl that ran five miles a day and was known for her white-girl hops on the basketball court. He misses the sister that could do as many pull-ups as the boys and who’s life revolved around the court and the gym.  I get it because I miss her too.

I also get that it’s much cooler to have a sister who plays college basketball than one who gets good grades and blogs about being sick.

I get it, but he doesn’t. I’ve tried to explain it to him several times: “I’ve tried to get back in shape but I keep getting infections.” Or, “I’m trying but my body gets very sick if I work out too hard now.” And even the hardest one, “No, I don’t think I’ll ever play basketball again. Not for school anyways.”

He doesn’t understand how before, even with the PI, I could do all these things (even though he doesn’t realize what a struggle that was) and now I can’t. For a while neither could I.

Then I figured it out: you can’t go back.

My parents weren’t good at action shots, so they had to wait for a FT. Also I think a teammate’s parent took this.

Years of running, lifting, sprinting up and down the court–they’re all gone, unraveled and eaten away by months of deconditioning, sickness and undernourishment. The muscles I worked so hard to build over years of training were metabolized to keep my organs going. My heart, which once propelled me through miles with ease, withered and weakened so much that mild cardio now gives me shaking chills. It’s like the first 18 years of my life never happened–like the strong, athletic version of Miranda never even existed. 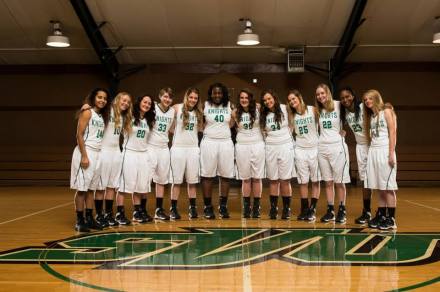 You can’t go back.

So you go forward.

I can’t play basketball anymore, so I put everything I’ve got into my school.

I can’t run out my feelings anymore, so I write.

I can’t do intense workouts anymore so I do yoga, walk, bike and build up slowly.

I can’t work as hard at a lot of things as I did before, so I work smarter.

I can’t be the person I was before so I try to become someone better, someone stronger, someone kinder.

You can’t go back. It’s hard, but it’s probably a good thing.